Groups are usually rendered respecting the same order they were created. If the order needs to be changed, use the Order Groups feature. When pressed, the following window appears: 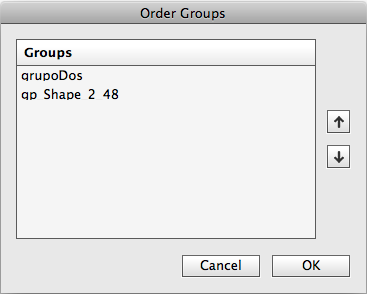 The two buttons (arrows) at the right side allow to change the order of appearance of the groups.

Important: Groups always render after all layers, which may cause some issues depending your design. If need to “force” the position of a group between layers, create an empty layer and name it with dash and the group name. For example, if you want a group named myGroup, create an empty layer in the position you want the group created and rename the layer to -myGroup (check the video below for a real example):