As the name states, Groups are used to group layers and nested groups in the final code. For example, you can have a group of layers animating together as a group.

To use properly, select the layers you want to group in Photoshop and then click the Create Group button. The following window appears: 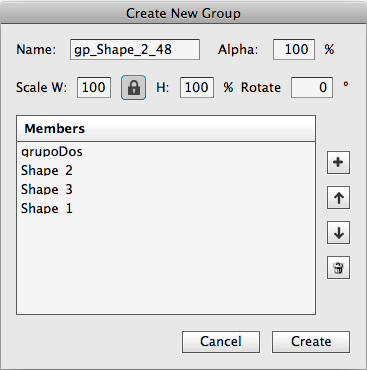 Although Kwik auto creates a name, it is preferable that you name it with something easier to remember. This is going to be the name of the group in the final code created from Kwik.

You can also set the initial transparency (alpha), scale and rotation of the group.

If, later, you need to add other layers in the group, click the + (more) button to select it (another option is to select all layers again, including the new ones, and re-create the group).

The two buttons (arrows) at the right side allow to change the order of appearance of the elements in the group.

Use the Trash (delete) button to delete a selected layer from the Members list.

Important: Groups always render after all layers, which may cause some issues depending your design. If need to “force” the position of a group between layers, create an empty layer and name it with dash and the group name. For example, if you want a group named myGroup, create an empty layer in the position you want the group created and rename the layer to -myGroup (check the video below for a real example):