This week I had the pleasure of having Travis Daub, from MacNeil/Lehrer Productions, sharing a little of his beautiful magazine Triple Crown, available for free at the AppStore. The app is also found at the New and Noteworthy section of the store and it is a great example of the versatility of Kwik.

Kwiksher: Can you tell a little bit about you and your company?

I work for MacNeil/Lehrer Productions, which produces the PBS NewsHour. We’re a nightly national television news show which is distributed on public television stations.

Several years ago, we integrated our digital and traditional broadcast groups in a step towards becoming more “platform neutral.” Since then, we have doubled down our investment in online and mobile publishing.

We produce an enormous amount of video, audio and text content on a daily basis, and we’re always looking for new ways to provide our content to our audience.

I’m the creative director here, so I like to think of myself as a mad scientist in a lab full of fun news projects.

Triple Crown is a magazine-style application which showcases three stories our staff reported about horse racing in Maryland. It is loaded with photos, video, audio and text. I’d like to think that it would knock an enjoyable 30-45 minutes off of any plane trip or waiting-room stint.

Specifically, the stories cover the lives of a jockey, a horse racing reporter, and King T. Leatherbury, one of the winningest trainers in racing history. 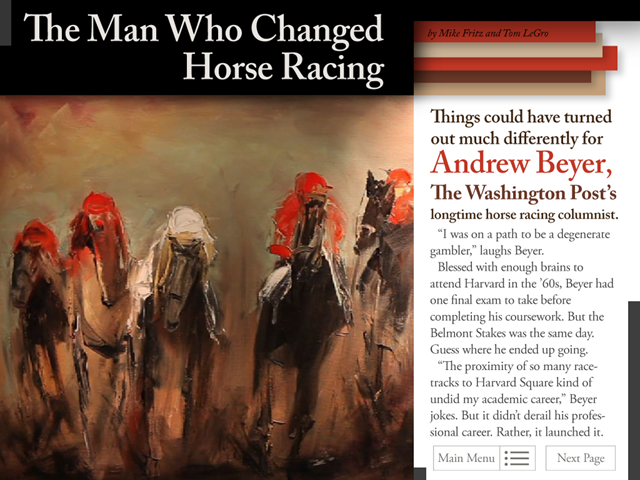 I have worked in traditional publishing, digital publishing, broadcast television, web and mobile publishing. Working with Kwik and Corona SDK is the most fun I’ve had with software since I first learned Photoshop. In fact, I think Kwik might be the most powerful Photoshop plugin I’ve ever seen. The workflow is outstanding, the project organization is intuitive, and best of all, you output XML and native Lua code that you can tweak yourself. Being able to compose a page in Photoshop and watch it appear in an app simulator seconds later is the definition of instant gratification. This app was built in less than 2 weeks of total work hours. And most of that time was spent on design.

My favorite features are the simple page transitions, which can be layered and organized to create more complex-looking behaviors. And the multimedia embedding. And the fact that I can still tweak the code, even after rendering out my entire project. And the fact that I can port the whole project on Android in a matter of minutes. I could go on and on, really. Oh, did I add the fact that the resulting apps are ridiculously stable? 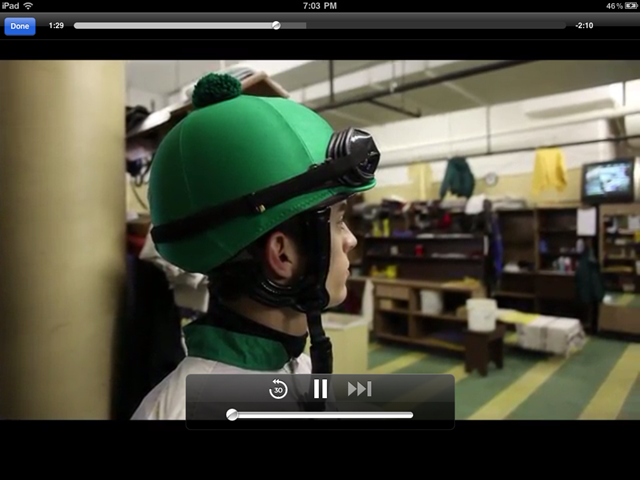 Unparalleled. Kwik is updating and iterating on almost a daily basis. If a bug is identified in the morning, it’s squashed by the afternoon. Alex is so great at providing quick, personal customer support, that I have to avoid the urge to call him with other problems in my life. How do I change the air filter on my humidifier? How do I get my credit card to lower my interest rates? But seriously, the quick updates and support helped to speed my project along. Anytime I ran into a problem, it had either already been fixed in an update, or a fix was only an email away.

We have at least two more apps in the immediate pipeline…one a collection of stories we’ve done on economic inequality in the U.S. vs. the rest of the world. We have a huge archive of interviews with newsmakers ranging from Fidel Castro to Barak Obama that I’d like to package together. Plus, my head is swimming with ideas for apps I’d like to develop myself.

I really want to thank Travis for his time and passion. However I must be honest saying that my wife changes the air filter and I am far from being a good credit card negotiator (I can spend well thou)

Seriously, if you have an app made with Kwik or simply want to share a few tricks using the plugin, please drop me a line at support@kwiksher.com