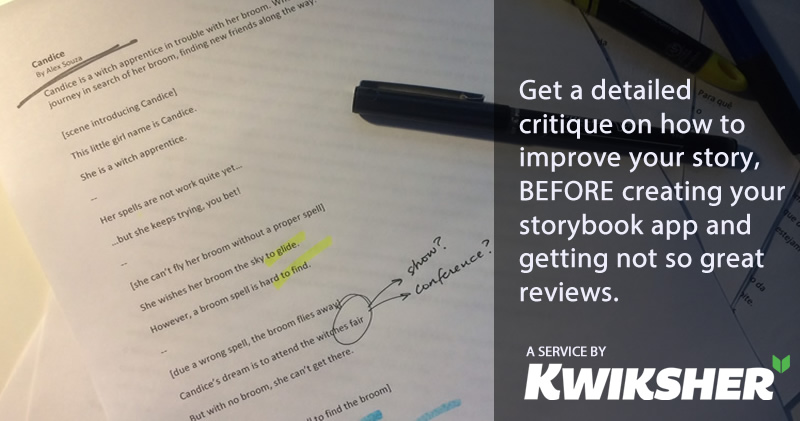 Most Kwik users are publishing stories for the first time. Their amazing excitement sometimes goes down when a reviewer says “the story is confuse” or “illustrations are gorgeous but story not much”. To avoid (real) situations like that, we are offering a new service called Storyline Review.

We have partnered with experienced, many times published, author and illustrator, Anna Hines, a long time Kwik user, to provide a detailed critique on how to improve your story, BEFORE starting to create your storybook app (with Kwik or with any other product or vendor). Save your time, money and frustration! Feel free to check Anna’s thoughts on this service.

I strongly believe Anna’s input will help to improve your stories and, consequently, increase your chances of getting better reviews, sales and awards (Anna has several of them in her career).

How does it work?

In a few words, after purchasing the review service, you log using your Kwiksher account, and submit your manuscript (it can be a text, storyboard, etc – just try to detail every point of your story). Our reviewer will provide comments, most times in up to 48 hours, so you will be able to improve your plot, if needed, before starting developing your app. You may exchange some last notes with our reviewer, who will reply back to you and close your request.

Below, a sample extract of what you may get (a real feedback from Anna to a Kwik user, who follow her advice and improved his story a lot):

Can something happen that makes <the character> stop the action… and we wonder along with <other character>… is he angry?  …is he going to explode?

All review services purchased in March will enjoy an introductory price of $75 (regular price is $100). Have already an story in mind? Check it with one of the best and enjoy this 25% off discount!

As always, please share your comments, feedback and suggestions.