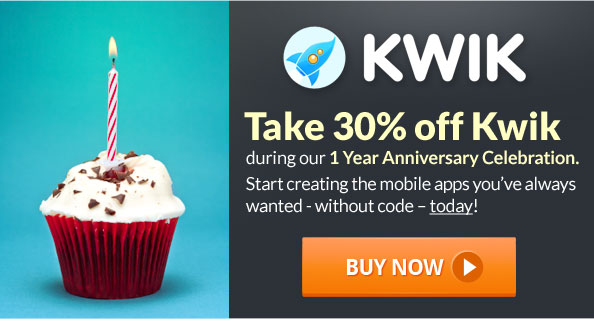 Save 30% off Kwik during our 1 Year Anniversary Celebration

As you have probably noticed, in celebration of our 1-year Anniversary we have launched our new site… and that’s just the beginning!

When I think back, it is hard to imagine that it has been only a year since I launched Kwiksher and its first product: Kwik – a revolutionary Photoshop plugin that levels the app-development playing field, enabling everyone from first-timers to professional designers to build mobile apps and interactive storybooks quickly and easily without the need for coding skills.

At the time I was pretty confident the product would be a success, but honestly, I never imagined it would be so well received. Especially when I look back in hindsight at the lack of promotion. [pullquote align=”left” type=”simple”]For those users who already love the way Kwik helps you make your Android and iPad applications a reality, you will be amazed with what we have planned for the year ahead! [/pullquote]Like the quote from my favorite movie ‘Field of Dreams‘ I believed that “if you build it, they will come”, and with word of mouth news of Kwik’s practical solution to design without code spread naturally and here we are one year later with more than 50 published apps created using this tool. It’s truly an awesome privilege to see so many talented illustrators, designers and creative minds pushing the plugin’s capabilities and using Kwik to deliver so many amazing interactive apps.

I would like to thank all of Kwik’s users and supporters, especially the team at Ansca and also to the many new friends (beta testers, alpha testers, even people not using Photoshop or Corona) for their words of encouragement, ideas and passion. I am really touched that so many of you have sent messages of support or comments telling me how Kwik has enabled you to pursue your dreams. Keep them coming as they bring me energy during the dark hours!

From version 1.0 to today, community feedback has been essential to the betterment of Kwik. Based on your requests and my surveys, I have added or improved nearly 100 new features in the first year alone. For those users who already love the way Kwik helps you make your Android and iPad applications a reality, you will be amazed with what we have planned for the year ahead! Especially those of you who work in teams or just like to tweak your code… there will be much more to share soon.

And for those of you who are new to Kwik, I invite you to take advantage of our first-ever promotion: Save 30% off Kwik during our 1 Year Anniversary Celebration. Enjoy all the benefits of Kwik today for 30% off the full price.

Thanks again everyone. I wish you continued success and keep sharing what you are creating with Kwik!