Today’s interview is with Alberto Fonseca, one of the developers of Trip Harrison Origins HD.  The app was made by Adventure Works and it is available at Apple’s AppStore.

Alex) Tell a little bit about you and your company

We are Adventure Works, an indie games studio consisting of team members spread out across the US. We’re passionate about making great games and are developing a series based on the original Trip Harrison sci-fi universe.

This is the first release from Adventure Works and it’s an interactive short form comic for the iPad and iPhone. It’s an introduction to our universe and features some of the characters who you will encounter in future productions. Origins follows Eldrick Harrison on his mysterious quest to discover the very origins of life.

The app also features exclusive concept art available as an in app purchase to support the development of the series.

You can view the trailer we’ve put together here:

We’ve also made the original soundtrack available on Bandcamp:

Kwik came at the right time as we were starting to put the comic together. Although it was very early in development we jumped on board because it looked like it would save us a ton of time laying things out, and it delivered. We love the fact it is a Photoshop plug-in as it integrates nicely into our workflow and allows us move things around visually and then quickly generate the code. It really is a timesaver.

We were very happy with the product and one of the best parts about it is the support we received from the developers. They were very open to feature requests and addressed any issues we encountered quickly. That’s what really sold us on it, we knew it was something that would grow with us as we got further into development.

Next we’re working on two titles in the Trip Harrison universe, Eldrick’s Adventure: Escape the Lazax and The Traveler. We’ve even got a book in the works! We don’t have many details to share yet but you can follow our progress on our blog at tripharrison.com 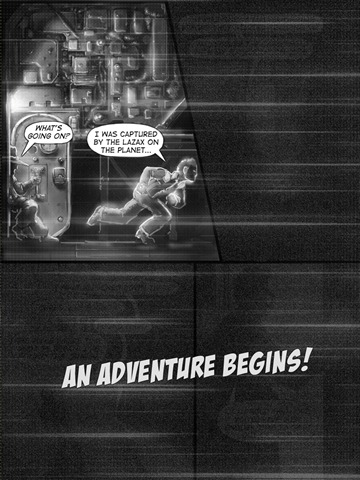